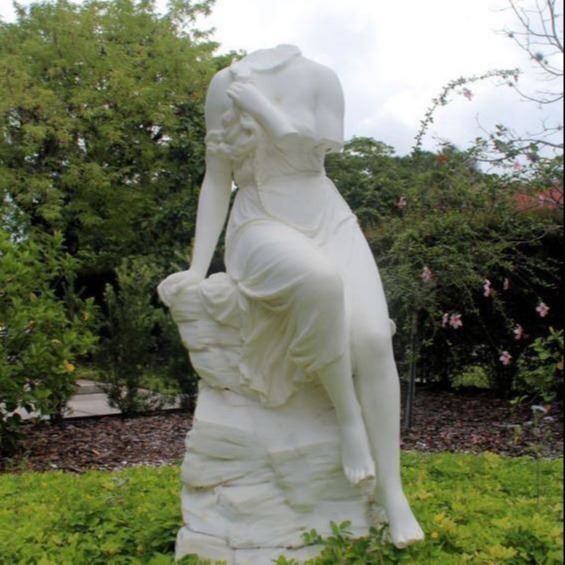 Lorelei is a white marble sculpture of a German siren that dates back to circa 1880, when her creator, Boston-born Emma Elisabeth Phinney, carved her in Italy from a single block of stone measuring 60-68 inches high. According to the legend, Lorelei was a distraught young maiden who threw herself into Germany’s Rhine River in despair over a feckless lover. She was transformed in death into a siren or mermaid whose hypnotic music has ever after lured sailors and fishermen to their death.

The sculpture is enchanting, from the folds of her sleeveless shift to the long braid of hair cascading down her back. Unfortunately, Lorelei’s head, left elbow and two of the toes of her left foot are missing. The damage was perpetrated by one or more nameless vandals in 1997. The missing parts have never been recovered.

The figure reclines on a pedestal carved in the shape of stacked shale, the type of rock found on the island in the Rhine River which also bears her name. The workmanship is delicate. The piece is rich in intricate details that are not obvious on cursory glance. Pearls dangle from a thick braid of hair and follow the contour of her right thigh before being lost in a fold of her form-hugging gown. Dainty fingertips hover above the teeth of the comb that rests on the stone beside her. Her narrow waist is circled by a finely-carved belt, and ferns and flowers decorate the shale that forms the pedestal on which Lorelei languorously lounges.

Lorelei on view in the Hibiscus Garden at the Fort Myers Lee County Garden Council, where she was moved on January 6, 2014 after the public library on Central Avenue moved to its new 40,000-square-foot home at the corner of First Street and Royal Palm Avenue. The Fort Myers-Lee County Garden Council  is located at 2166 Virginia Avenue (off McGregor Blvd), Fort Myers, Florida 33901. The sculpture’s coordinates are Latitude 26 degrees, 63 minutes and 4.543 seconds and Longitude 81 degrees, 87 minutes and 7.368 seconds. For days and times of operation, please telephone (239) 332-4942 or visit http://www.fmlcgardencouncil.com.

Lorelei‘s sculptor was Emma Elisabeth Phinney. She was one of the first women to receive a degree from the Royal Academy of Fine Arts in Rome.

According to an article appearing in the New York Times on May 26, 1881, Phinney’s “short career as an art student has been crowned with more than the usual success. Within the five years she has been at work, she has produced several popular statues; those that have attracted the most attention being a Lorelei, the bust of a North American Indian, and one of a negro [sic] boy formerly in the Grosvenor Gallery in London and now on exhibit in the Paris Salon. Mrs. Phinney is a realist in art, as these subjects testify.”

At the Royal Academy, Phinney studied under sculptor Luigi Amici and alongside Antonio Rossetti. She is mentioned in Who Was Who in American Art, 1564-1975, published in 3 volumes in 1999 by Peter Hastings Falk. However, no photograph has been found or information regarding her later work or career.