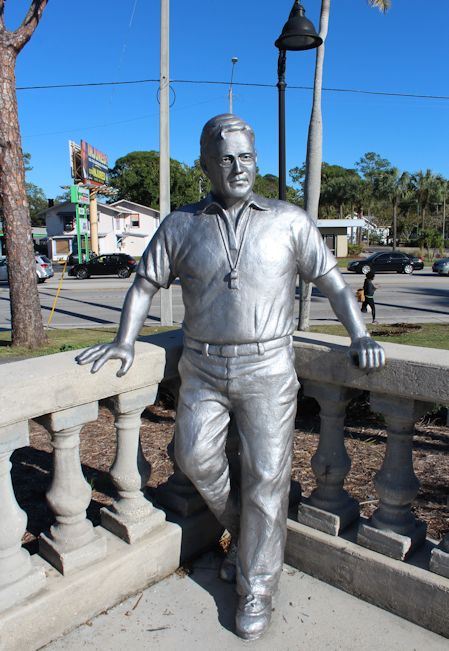 Located in the northeast corner of the campus of Lee Memorial Hospital is Wes Nott Park, a broad concrete courtyard dominated by wide circular fountain punctuated at the far end by a V-shaped balustrade against which leans a life-size statue of legendary Fort Myers High swim coach Wes Nott. The park appropriately sits on the site of what was once the Wes Nott swimming pool. Today, Coach Nott presides over the space, standing against a railing that abuts the southbound lanes of Cleveland Avenue (U.S. 41).

The cold cast aluminum sculpture was commissioned by the Fort Myers Beautification Advisory Board in accordance with its long-standing program of honoring local people. It was cast by North Fort Myers sculptor D.J. Wilkins and dedicated by the City of Fort Myers on July 14, 2000 to the Lee Memorial Auxiliary for their generous contribution to the beautification of Wes Nott Park.

“The railing he is leaning against is a duplication of the one that was around the pool,” notes Wilkins, who also “bent [the coach’s] right leg and placed his foot on the bottom of the rail” to signify that Nott walked with a limp in his right leg as a result of polio (see below).

Nott touched the lives of an estimated 8,000 children who fondly remember him for helping them achieve their best both in and out of the water by emphasizing hard work and good sportsmanship. Nott overcame difficulties associated with having polio when he was 18 months old to become state diving champion in Ann Arbor, Michigan, lettering all four years on his college swim team. Nott joined the staff of Fort Myers High School in 1945 and under his supervision, both boys’ and girls’ teams competed successfully and won numerous titles over the ensuing three decades. Nott died in 1984 at the age of 78.

Wes Nott is one of the people included by local historian Gerri Reaves in her 2012 book, Legendary Locals of Fort Myers, which showcases the contributions and lives of Fort Myers residents from the days of the Seminole Wars to the present. 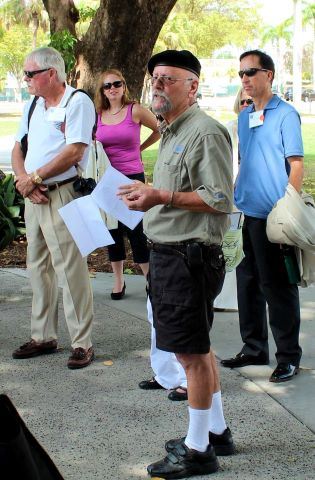