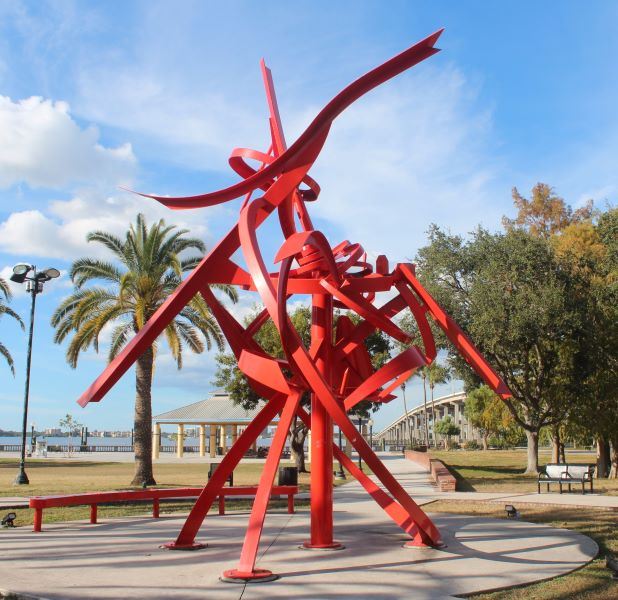 Fire Dance is the first commission awarded to an artist by the City of Fort Myers Public Art Committee. Located in a circle where Bay Street dead-ends at the eastern edge of Centennial Park, the 25-foot-tall Dupont red aluminum sculpture represents sculptor David Black’s interpretation of the park’s energy and vitality during events. “My wife, and I first visited Centennial Park at night,” Black relates. “We walked right into a jazz festival. Fire Dance incorporates the sounds of the music and the noise of the crowd. Circles within circles; it’s active, open, airy and rhythmic, just like jazz.”

Black designed Fire Dance to be interactive. The sculpture is open so that people can walk through it, look up and freely interact with the sculpture from every conceivable vantage. “Inside the piece are four hidden spirals that create a story for your imagination,” invites Black. “It is my hope that Fire Dance will lift each viewer’s spirits and deepen their sense of community with Fort Myers by engendering a sense of civic pride.”

David Black is a proto-architectural monumental artist whose career in sculpture dates back to 1980. He has mounted major exhibitions at museums and galleries throughout the United States and Europe, including the Contemporaries Gallery and PS One in New York, The Gilman Gallery in Chicago, the Taft Museum in Cincinnati, the Indianapolis Museum of Art, the Columbus Museum of Art, the University of Iowa Art Museum, the Dayton Art Institute, Die Neue Nationalgalerie and Amerika Haus in Berlin and the Lehmbruck Museum in Duisburg, Germany.

Black was a professor emeritus in art at Ohio State University for 30 years.A native of Gloucester, Massachusetts, he received his B.A. cum laude from Wesleyan University, where he was also Phi Beta Kappa, and his M.A. from Indiana University. He is a Fullbright scholar, National Endowment for the Arts Individual Artist Grant recipient and has enjoyed fellowships in Germany and Mexico. His large-scale modernist sculpture Windpoint won the Shikanai grand prize in the prestigious Henry Moore International Sculpture Competition in Nagano, Japan and is permanently installed at the entrance to the Utsukushi-ga-hara Art Museum there. At 47 feet tall by 140 feet long, Black’s largest public art installation is a piece called Flyover. Located in Dayton, Ohio, it is a memorial to the Wright Brothers first powered flight. 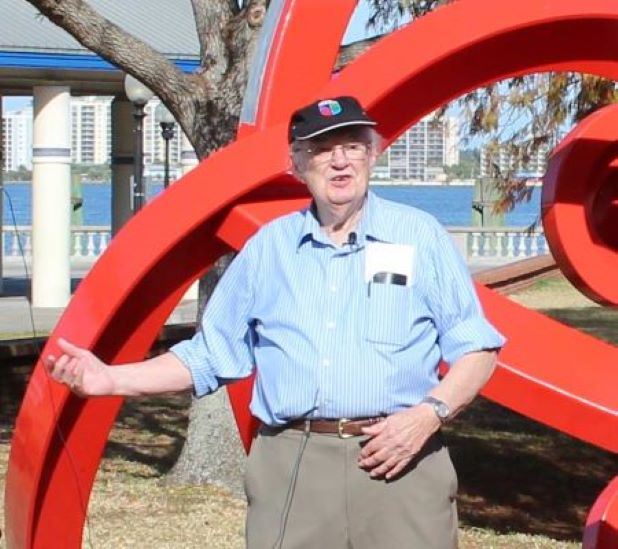 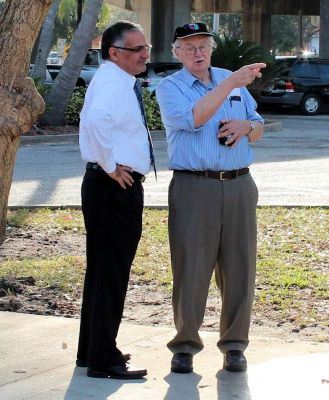