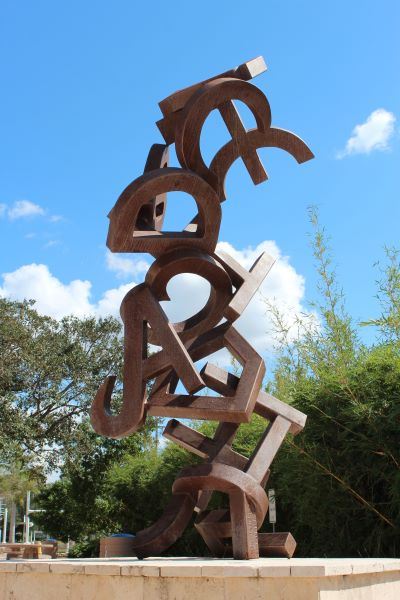 Marks & Brands is a site-specific sculptural installation that commemorates the rich traditions of the cattle industry that flourished in Southwest Florida during the late 19th and early 20th centuries. It was conceived, designed and fabricated by California sculptor and art instructor Peter Mitten, who was chosen from a field of three finalists and 112 applicants.

The installation consists of a large three-dimensional ferrous metal sculpture that is located in a water feature in the courtyard of the new Fort Myers Regional Library on First Street and Royal Palm Boulevard, and four bronze relief panels containing the imprints of cattle hooves that have been inserted in the sidewalk running along First Street and McGregor Boulevard to identify the site of the historic cattle trail that once cut through the city.

For the 3D totemic piece, Mitten has stacked various cattle brand shapes in a calligraphic linear configuration that pays tribute to the “historic branding irons utilized by Lee County’s cattle ranchers to mark their cattle.” Known as Stacked Brands, the 400-500 pound rust-colored sculpture stands eight feet in height, although it appears taller because it has been mounted on a 2 x 4 x 4 foot travertine clad pedestal which resides in the center of a shallow 12 foot wide by 77 foot long water feature that runs along the west side of the plaza opposite the library’s entrance. The sculpture is on loan to Lee County from the City of Fort Myers under a long-term lease in exchange for which Lee County agreed to install, light and maintain the piece, which has been sealed with three coats of clear Smart Coat sealer to protect it from corrosion and the sun’s UV rays.

California sculptor Peter Mitten has been making and exhibiting sculptural works since 1976. With a background in cast metals, he has interpreted canyons, valleys, rock outcroppings and distinctive areas along wilderness trails through small, medium and large-scale cast and fabricated metal, bronze, aluminum and iron sculptures, as well as granite and painted steel and wood assemblages ranging in size from desktop to 20 feet in height. Although his art has traditionally been inspired by the hard surfaces, landscape and water drainage patterns found in the Southwestern United States, his recent work explores modular sculptural interpretations of micro and macroscopic systems.

Among the public art commissions he has completed are installations at the San Diego County Library, the Mt. San Jacinto College Library in Menifee, California, the UCSD Mathematics Department in La Jolla, California, the Music Department at Point Loma Nazarene University in San Diego, the Escondido Transit Center and the Rapid Transit Center in Plano, Texas, as well as in venues in Belmont, Massachusetts and Prescott Valley, Arizona.

Peter has MFA in sculpture from Southern Illinois University School of Art and Design (1976). He currently teaches life sculpture and three dimensional design at Mt. San Jacinto College in Menifee. He is also involved in curriculum and teaching for the Oak Lake Art Center in Julian, California. 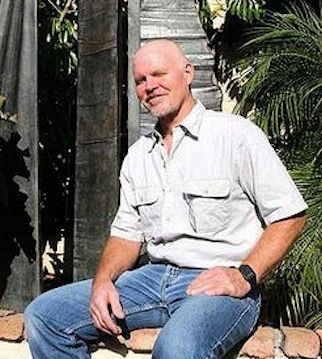