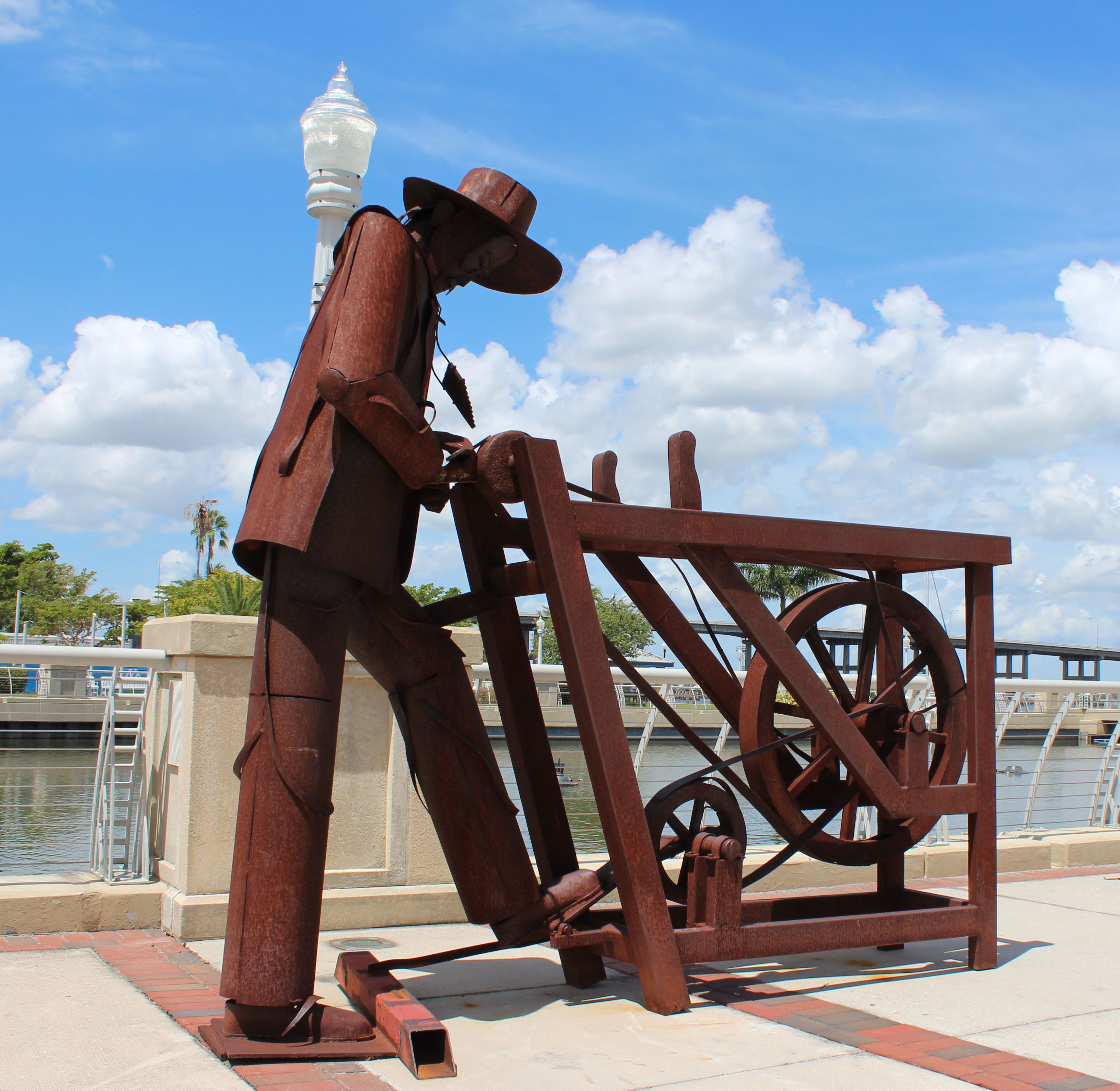 Al Filo (The Knife Sharpener): This piece pays homage to the antiquated trade of the old knife sharpener, whose motorized stone wheel once emitted a deep growl and glittering sparks that seared themselves into imagination of children and fabric of the community’s spirit. To find another life-size statue of a knife maker/sharpener, you would have to travel to Frosolone, Italy, a town of about 3,300 that is known historically for its knife craftsmanship. In addition to their statue, Frosolone has a museum dedicated to knives and scissor-making and hosts an annual “forging festival” that draws thousands. 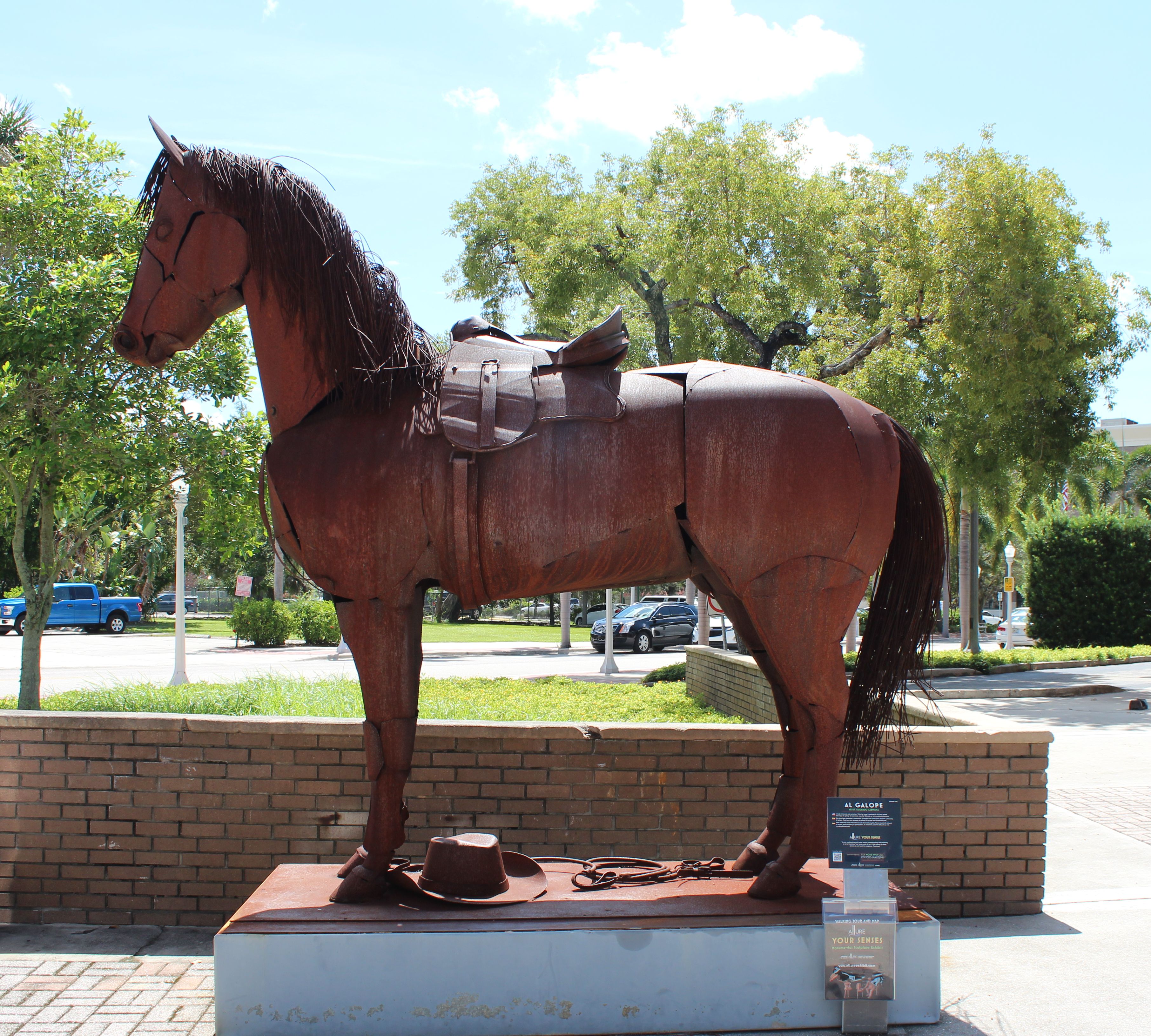 Al Galope (The Horse): This piece portrays both intensity and restriction, beauty and simplicity. Although standing still, the horse is both awake and eager to gallop. 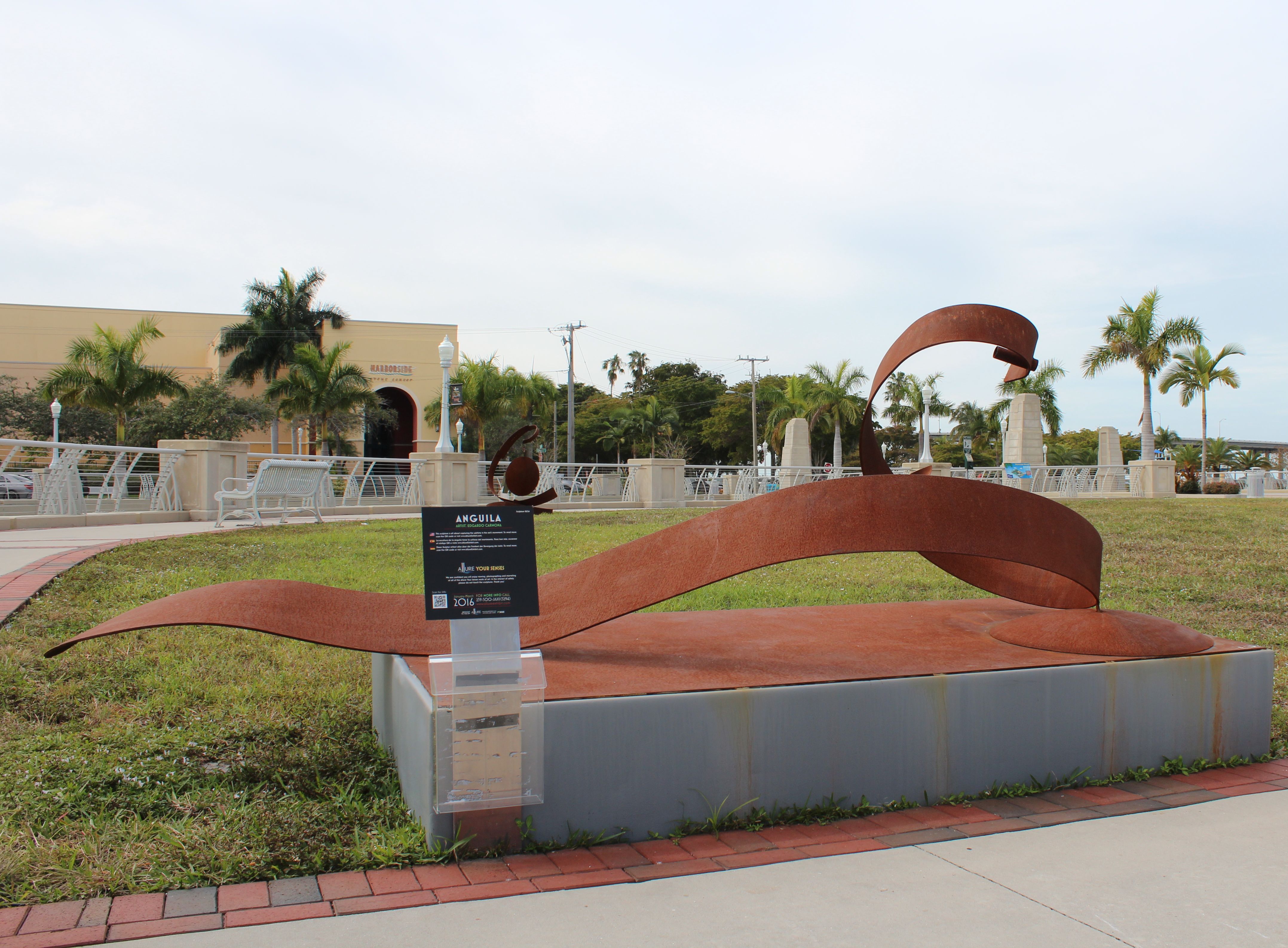 Anquila (Eel): In this sculpture, sculptor Edgardo Carmona captures the subtlety of the eel’s movement. More than simply sculpting a sea creature that spends its life in the waters of rivers and oceans, the artist focuses on bringing to life the subtle movements that seem to flow in the air. 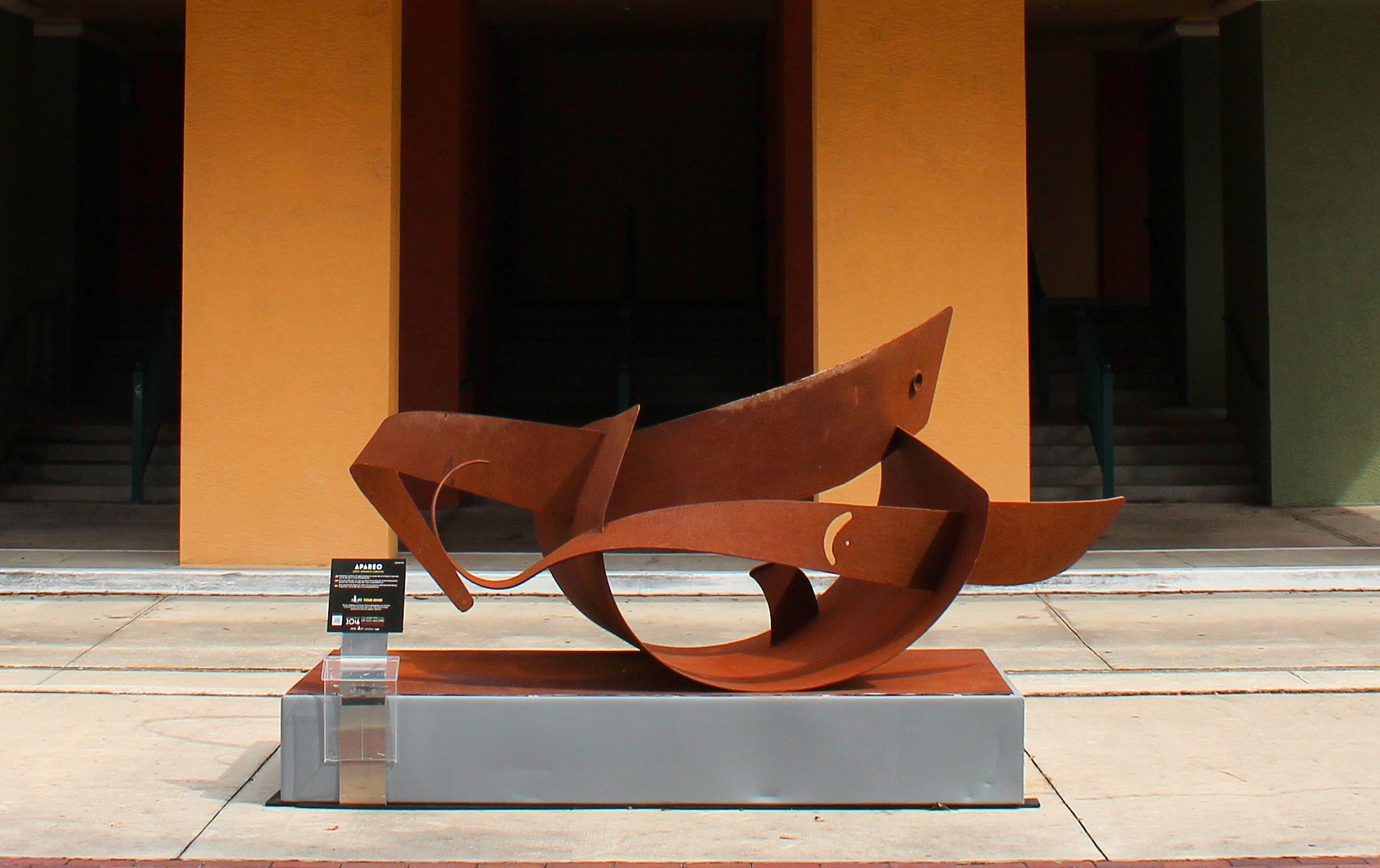 Apareo (Mating or Pairing): Resembling a symphony, this piece recreates the movement, intimacy and silent music that exist between two organisms during the act of mating. 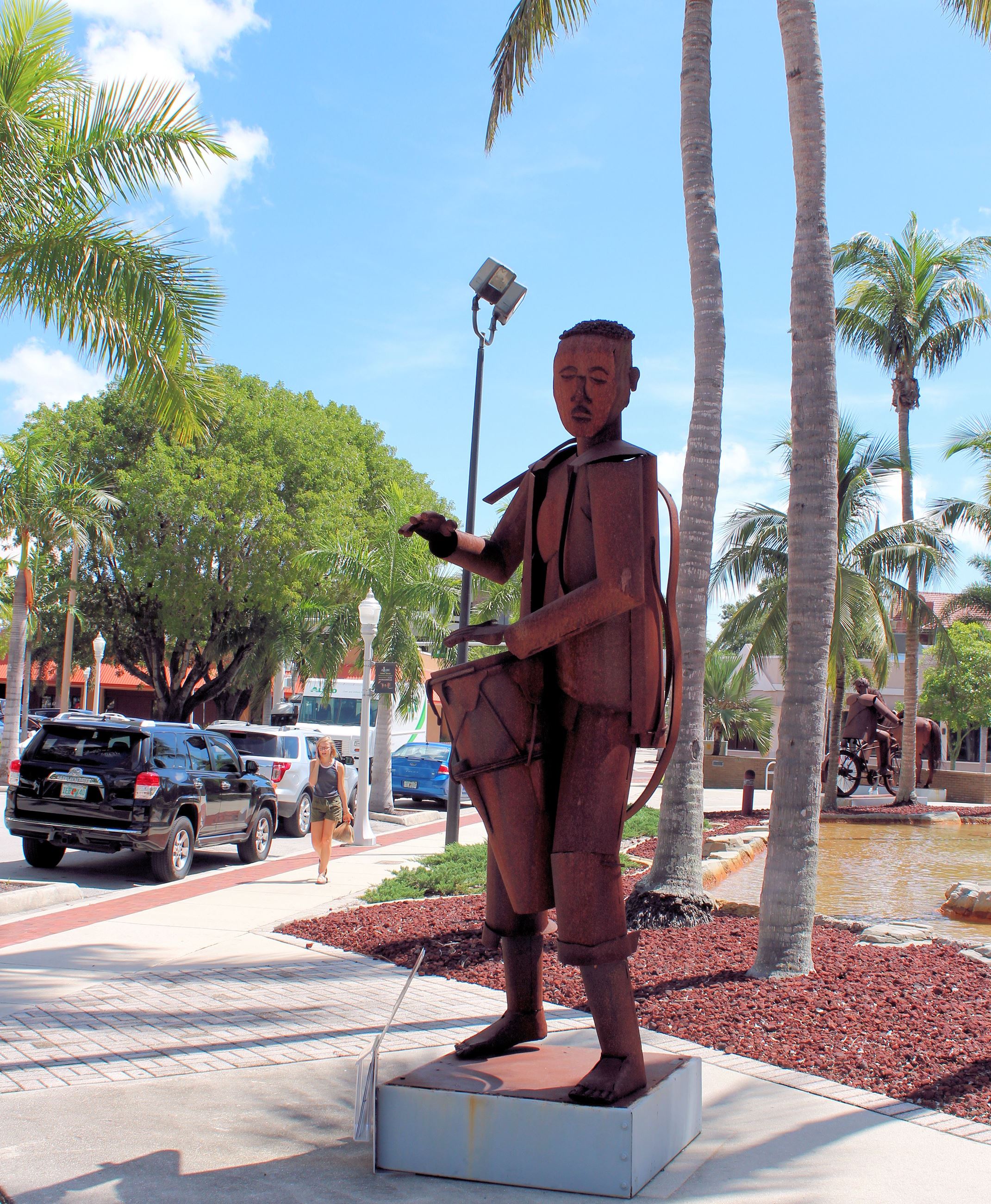 Cadencia (Bongo Drummer): An old African myth postulates that the drum can wake up and play itself independent of its player. The drums integrate themselves to the body and hands of the artist, as if they were one. This harmonic sculpture creates one single integrated rhythm. 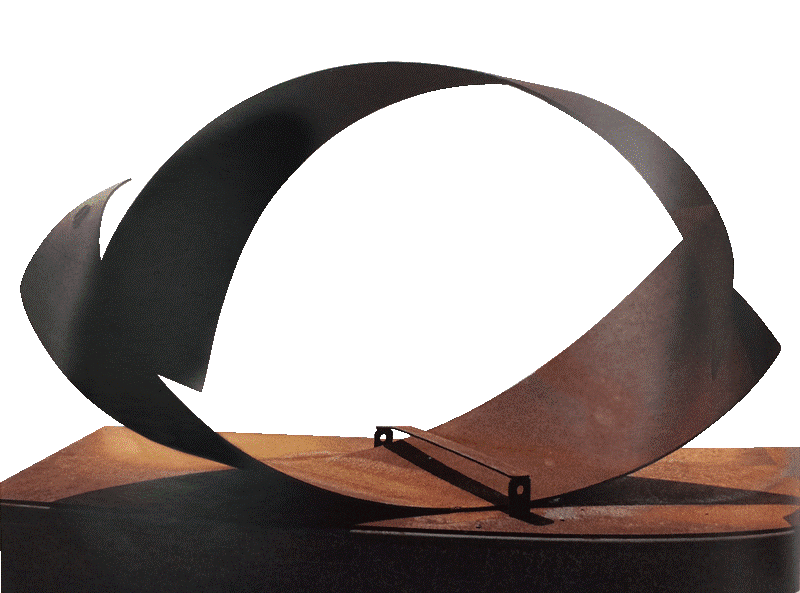 Caracol (Snail’s Shell): With minimalist intensity and limited lines and shapes, in this piece sculptor Edgardo Carmona captures the mysterious beauty and spiral body that sleeps below the snail’s hard shell. 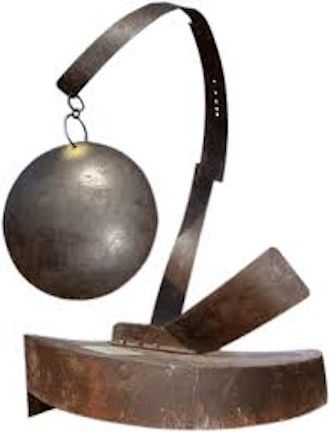 Deshove (Fertilization): In this artwork, the artist employs just a few elements to recreate the moment of fertilization. The release of the fish eggs is defined in this sculpture as a large circle; the process of fertilization in the form of curves. 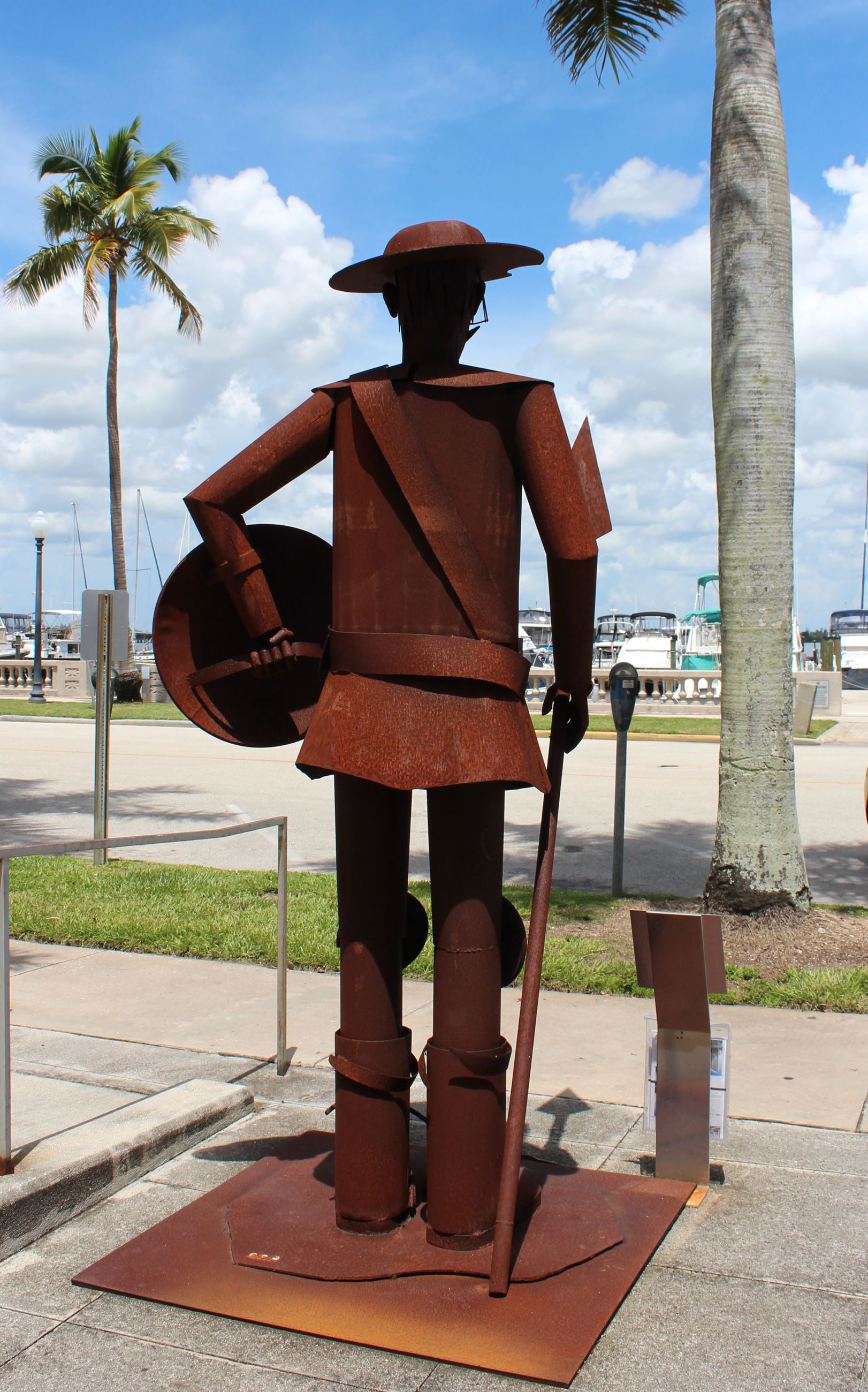 Don Quijote: In this piece, the sculptor recreates the famous character Don Quixote from the classic Spanish novel The Ingenious Gentleman Dox Quixote de La Mancha by Miguel de Cervantes Saavedra. Anxious to begin his battle, the expression of hope and illusion is clearly depicted on the adventurous character’s face. This sculpture is also a tribute to the character Don Quixote Incarnates – the utopian spirit of following one’s own dreams.

Duo Sinfonico: The flute possesses significance in Colombian history that transcends it mere musicality. According to legend, one day African slaves assembled along the shore in a drum circle. Hearing their bongos, natives in the mountains above them rejoined with their flutes. They eventually came down to the shore and offered the slave chichi, an alcoholic drink made of fermented corn. After a few drinks, they started playing music together. It was the beginning of the mestizo styles of cumbia and also gaita music.

Now known as gaitas, the flutes are played in pairs: male and female. The female gaita has five holes and plays the melody and improvises; the male gaita possesses only two holes and gives the harmonic accompaniment. The two gaitas’ melodies intertwine, at times sounding like birds while at others, developing complex melodic lines. Thus, the Man Playing Flute expresses themes incorporated by the artist in related works, like Apareo (Mating/Pairing), Cadencia (Bongo Drummer) and Deshove (Fertilization). 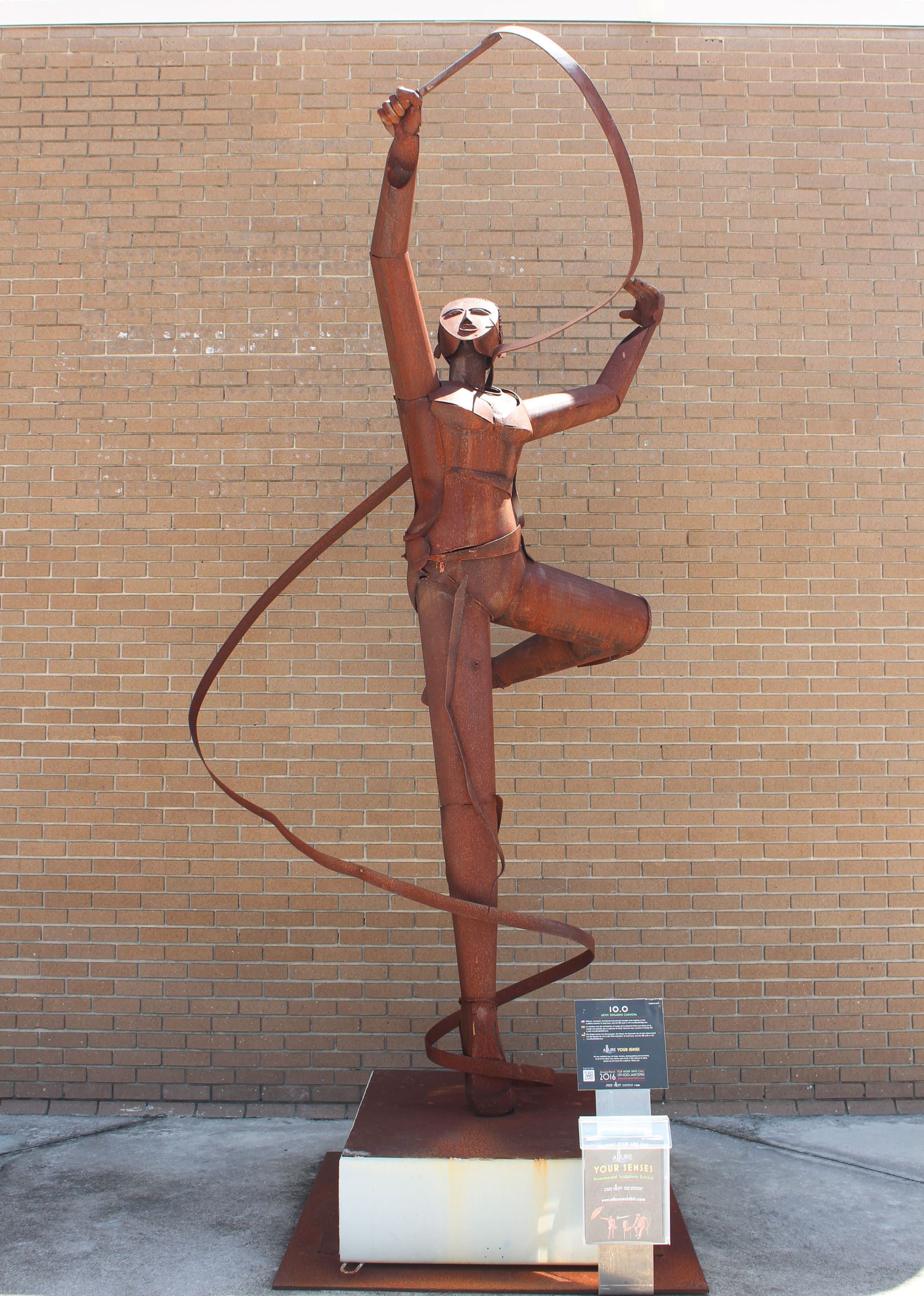 Ena En La Plaza (Ribbon Routine): This sculpture creates two integrated movements – the body of the rhythmic gymnast playing with a ribbon and the spirals that spread in the wind as she engages in a dance that defines gravity. This interplay underscores balance, movement, internal and external strength which combine to find and express a sublime, poignant moment in time. [Rhythmic gymnastics has been an Olympic sport since 1984. Compulsory elements include flicks, circles, snakes, spirals and throws. Routines require a high degree of coordination to form the spirals and circles. Judges look for large, smooth, flowing movements and penalize any knots which may accidentally form in the ribbon during the routine.] 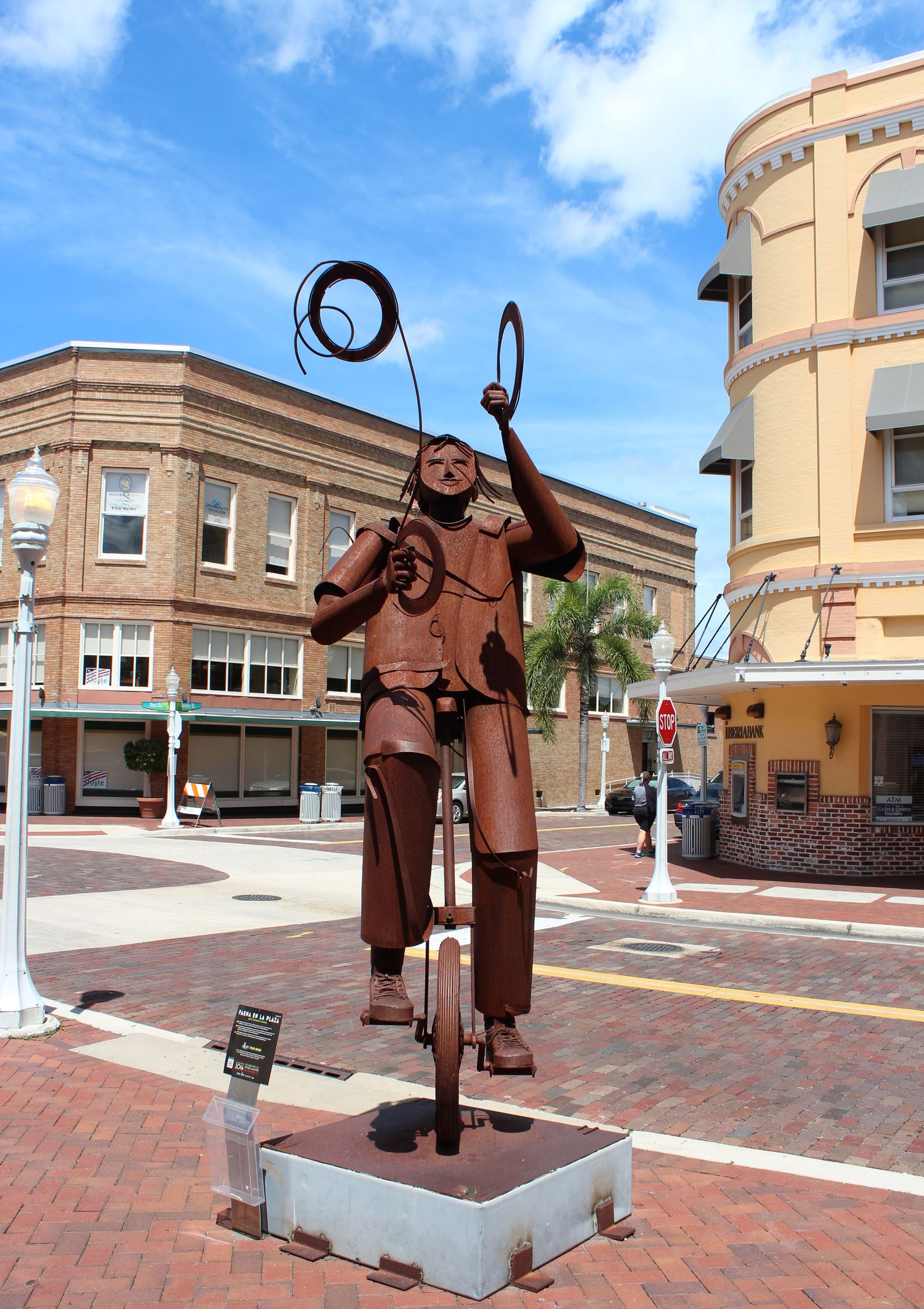 Faena En La Plaza (Unicycle Juggler): In this piece, sculptor Edgardo Carmona depicts a juggler sitting atop his unicycle with his rings ready for action while the wind tests his balance. [Cartagena is known universally for its numerous plazas, and Plaza de la Trinidad in the grungy Gethsemane district treats tourists from all over the world to lovely little restaurants and bars and all manner of enthusiastic street performers, from hip-hop dancers to jugglers and acrobats who jump and spin to the sound of breaking, locking and popping. But it was actually a Scottish performer who went by the stage name of Boy Foy who pioneered the art of unicycle juggling in the mid-1930s. In addition to quarter-inch-thick wood rings, Foy’s act consisted of 3 and 4 club routines, 3 top hats, ball-and-mouth stick work, and several combination tricks. At the peak of his 50-year career, he also performed a cups-and saucers routine.] 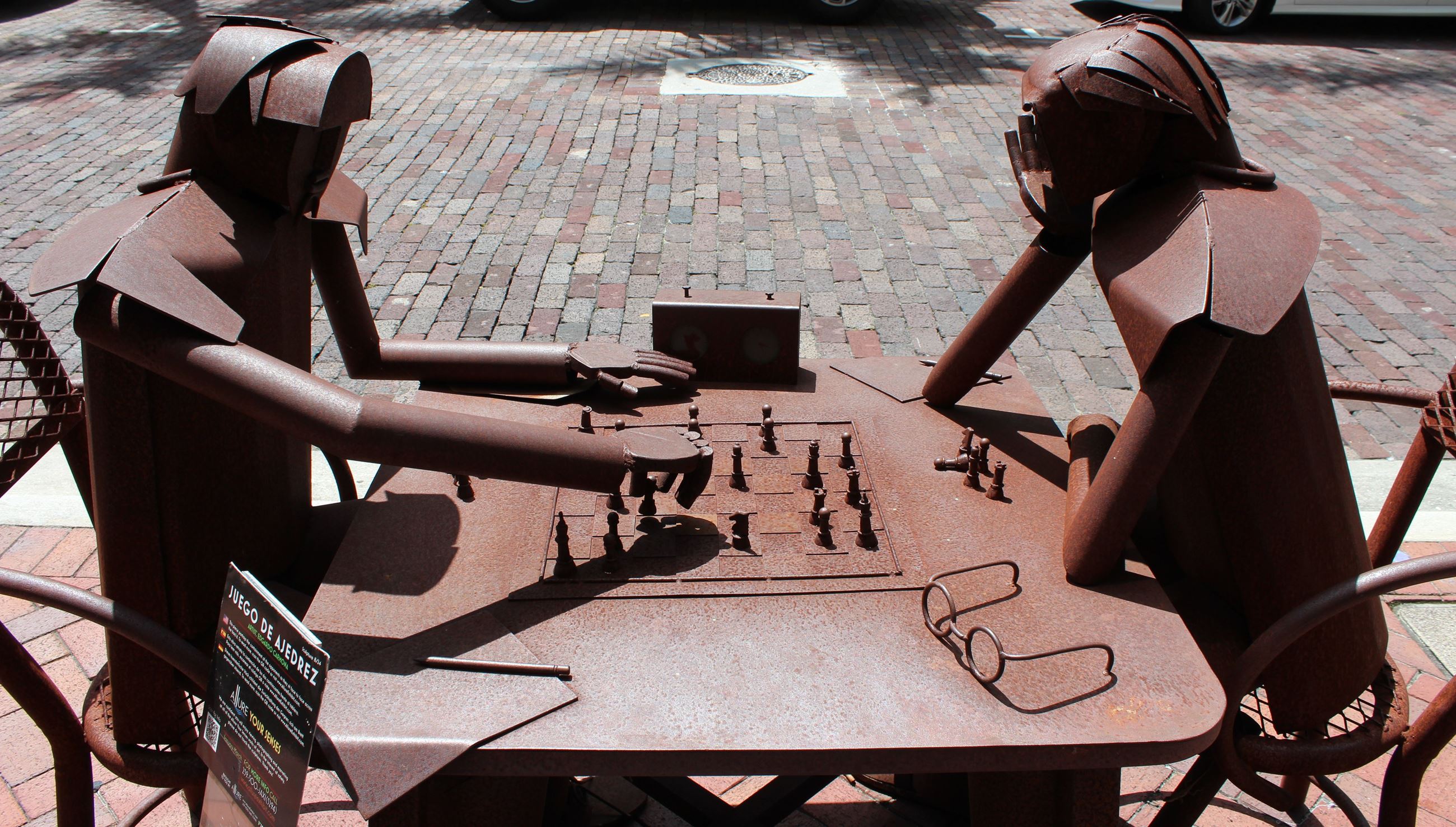 Juego De Ajedrez (The Chess Players): In this piece, sculptor Edgardo Carmona portrays the containment of the opponents as they sit face to face across a chess board. Each move could lead to victory or failure. The expressions on the players’ faces and gestures they make with their hands are the result of thorough observation. The artist sketched out several versions of this sculpture, testing his knowledge of the game and the implications of the moves and scenarios of the players’ expressions. “Chess and dominos are not the same,” Carmona has pointed out. “There is a specific spirit to each game.” [This particular sculpture depicts two chess players in a square outside Iglesia de San Pedro Claver in Cartagena. Chess is a favorite pastime in Cartagena, with many locals flocking to the Liga de Ajedres or Chess League on the corner of Plaza Bolivar for a game on tables set up beneath a painting of a wizard-type character gazing over a chess set. 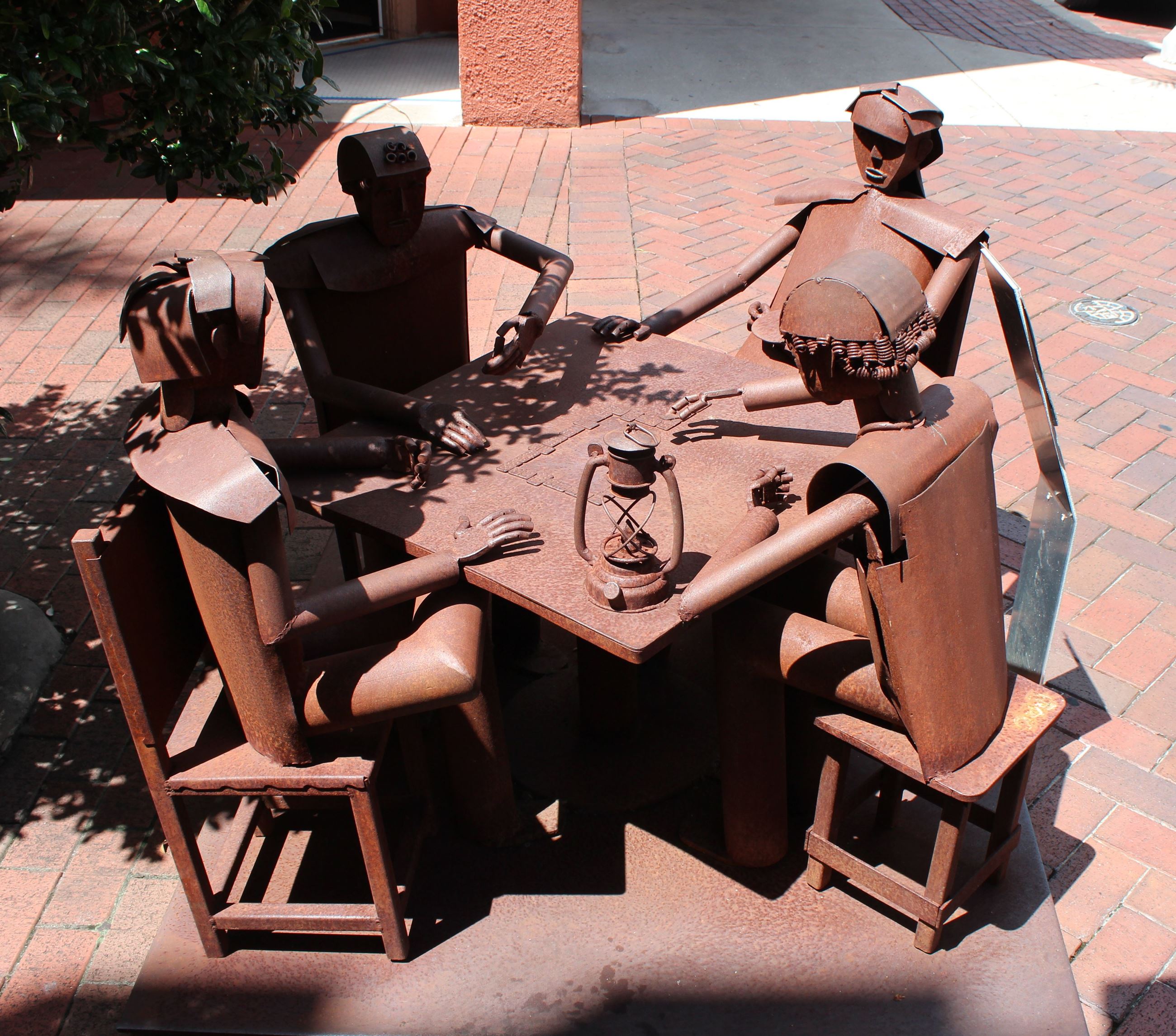 Juego de Domino (Domino Players): Domino players are an emblematic part of tradition and life in the Caribbean and Antilles. This piece depicts the simplicity and ease of outdoor Caribbean living. The players sit around a domino game and strategize each move based on their decoding of missing pieces to complete the game. 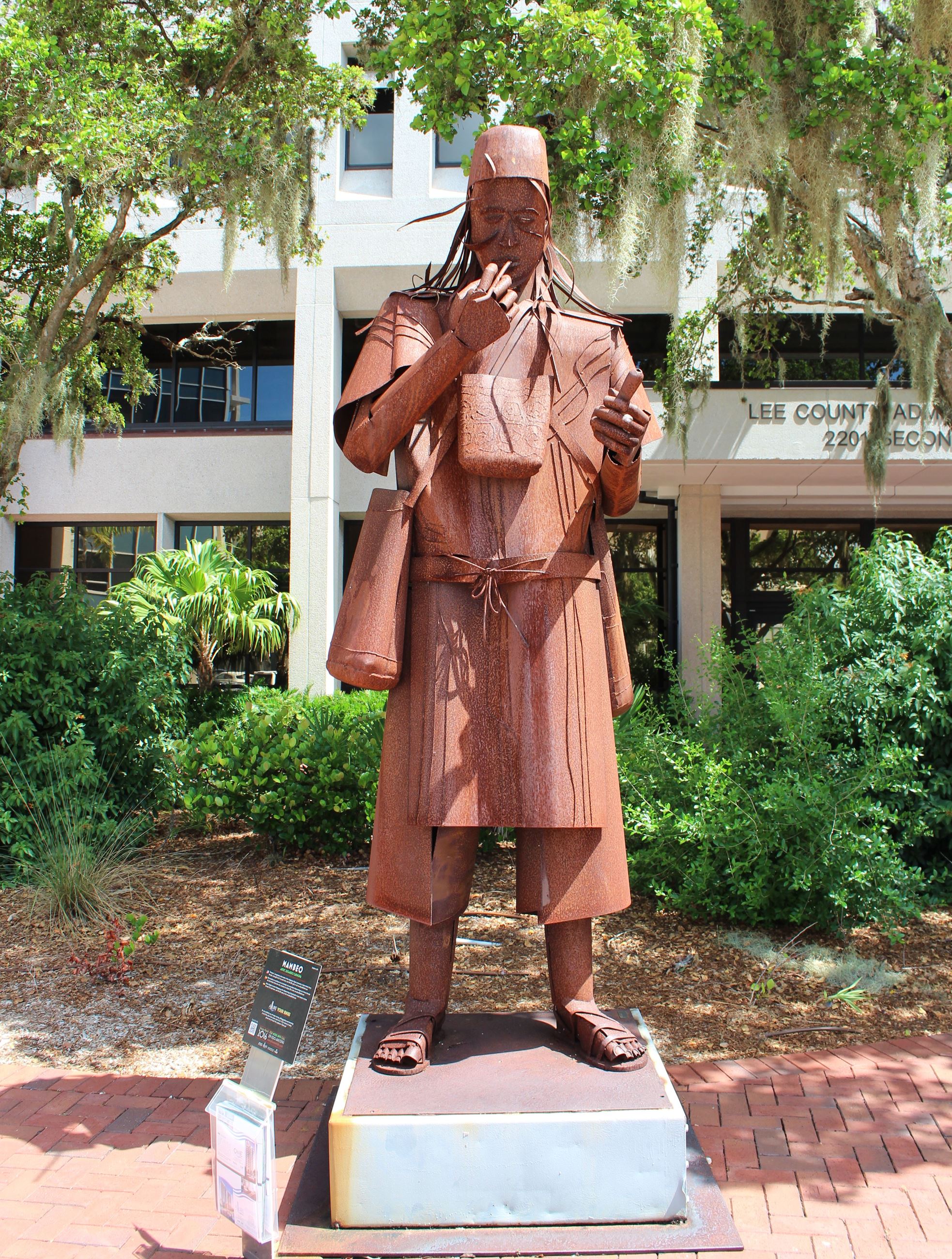 Mambeo (Chewing Coca Leaves): This sculpture pays homage to the indigenous Kogui community in Santa Marta’s Sierra Nevada. The tribe’s leader, “El Mamo,” is brought to life in this sculpture, which depicts a common practice of chewing on coca leaves. [The centuries-old tradition of chewing coca leaves is especially popular among working class Columbians, particularly those engaged in physically-demanding labor. Chewing coca leaves acts as an appetite suppressant, helps with altitude sickness, provides energy and improves digestion. Contrary to popular belief, the leaves do not release cocaine, provide no high when chewed and are not addictive.] 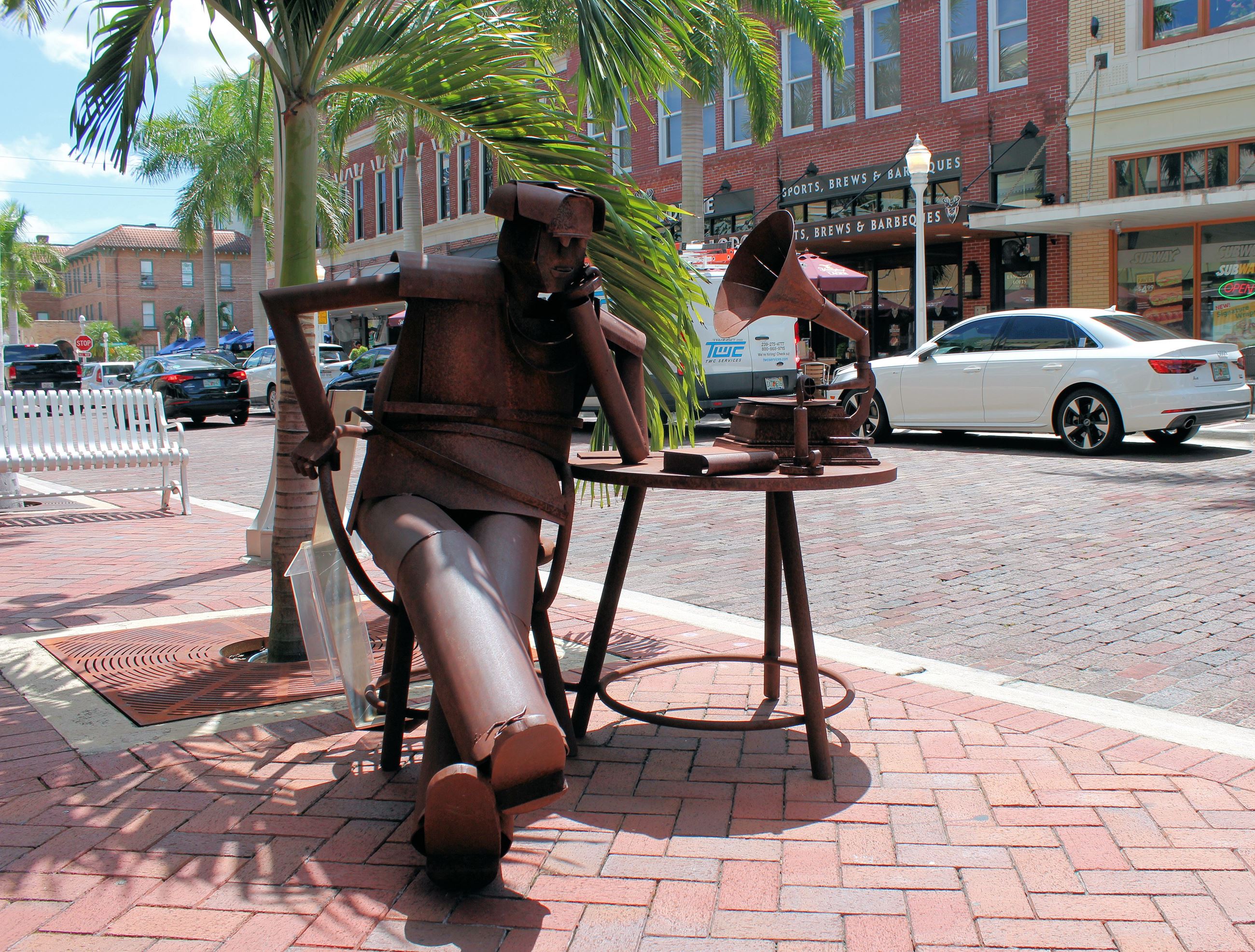 Melomano (Music Lover): This sculpture captures three elements: setting, position and mystery. It transports viewers to a scene where a music lover sits in his rocking chair listening to music. He sits in a position of excitement and curiosity, bringing his ear close to the speaker to ensure he is able to capture every note. It creates a sense of mystery and allure as to what could be so magical in this song. 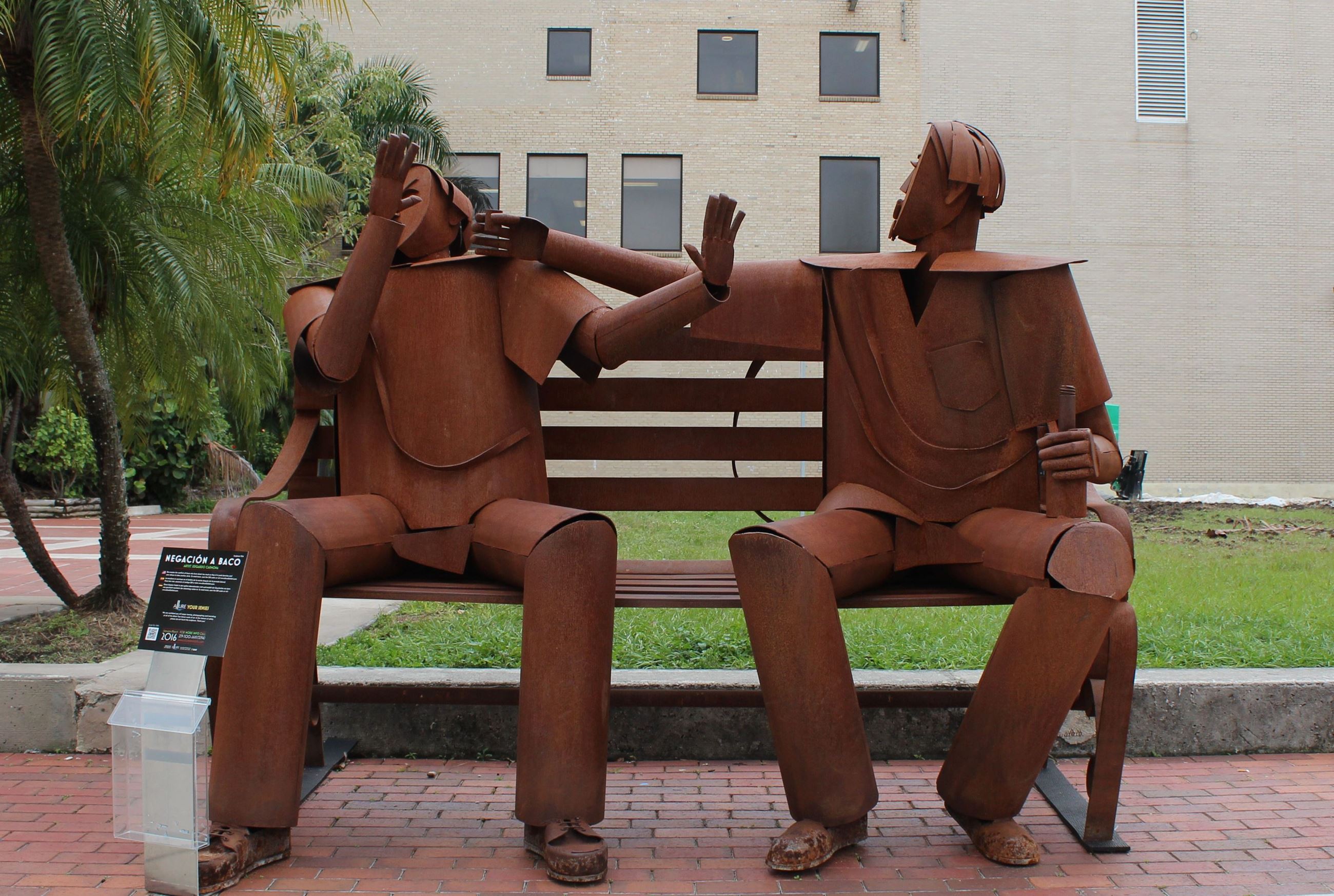 Negacion A Baco (Two Drunks on a Park Bench): This piece takes place in the late evening hours, narrating the story of what takes place after the work day is over and recreates the conflicts of those that have had too much to drink. As they sit on a park bench, one man refuses to take another drink. The gestures of the characters and the movement of their hands in the air tell a story, incorporating irony, humor and studied emotions.

Nostalgia De Cuerdas (Nostalgia of Strings): The suggestion completes the hand of the one who plays the strings in this sculpture. The artist discovers that the figurative can be reinvented with silence and space. 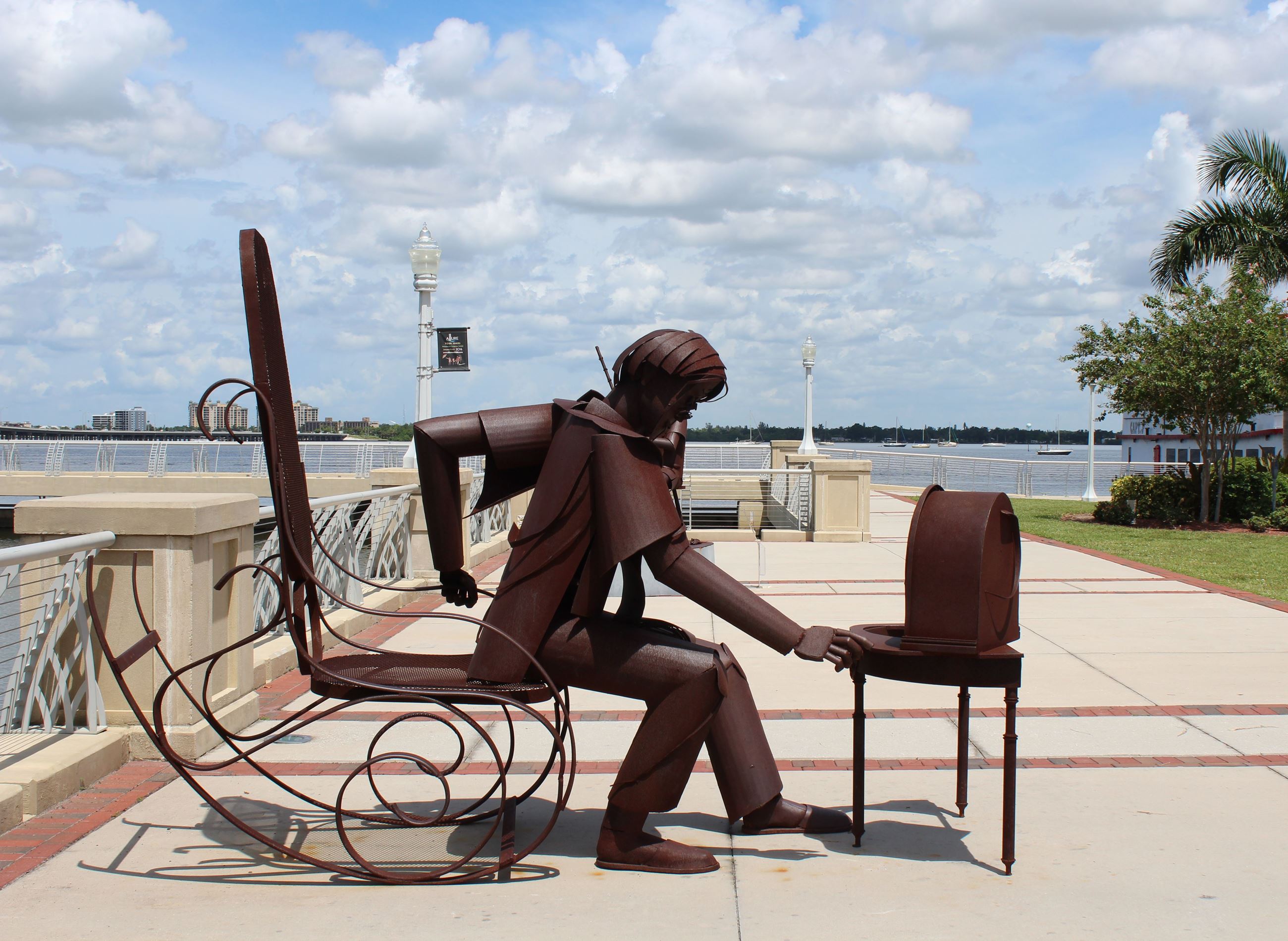 Sintonia (Nostalgic Tune on the Radio): In this sculpture, Edgardo Carmona captures a moment where time sits still and nothing else matters as the subject, sitting in his rocking chair, listens to the news on the radio while reading a favorite book. This work of art depicts the nostalgia of passing time. The scene stays embedded in our memories forever. [This work was inspired by Carmona’s father, a college math professor who spent a lot of time listening to the news on his radio. “He was very attuned to what was happening in the entire city,” Carmona said about his father. “He lived with his own frequency in his own world.”] 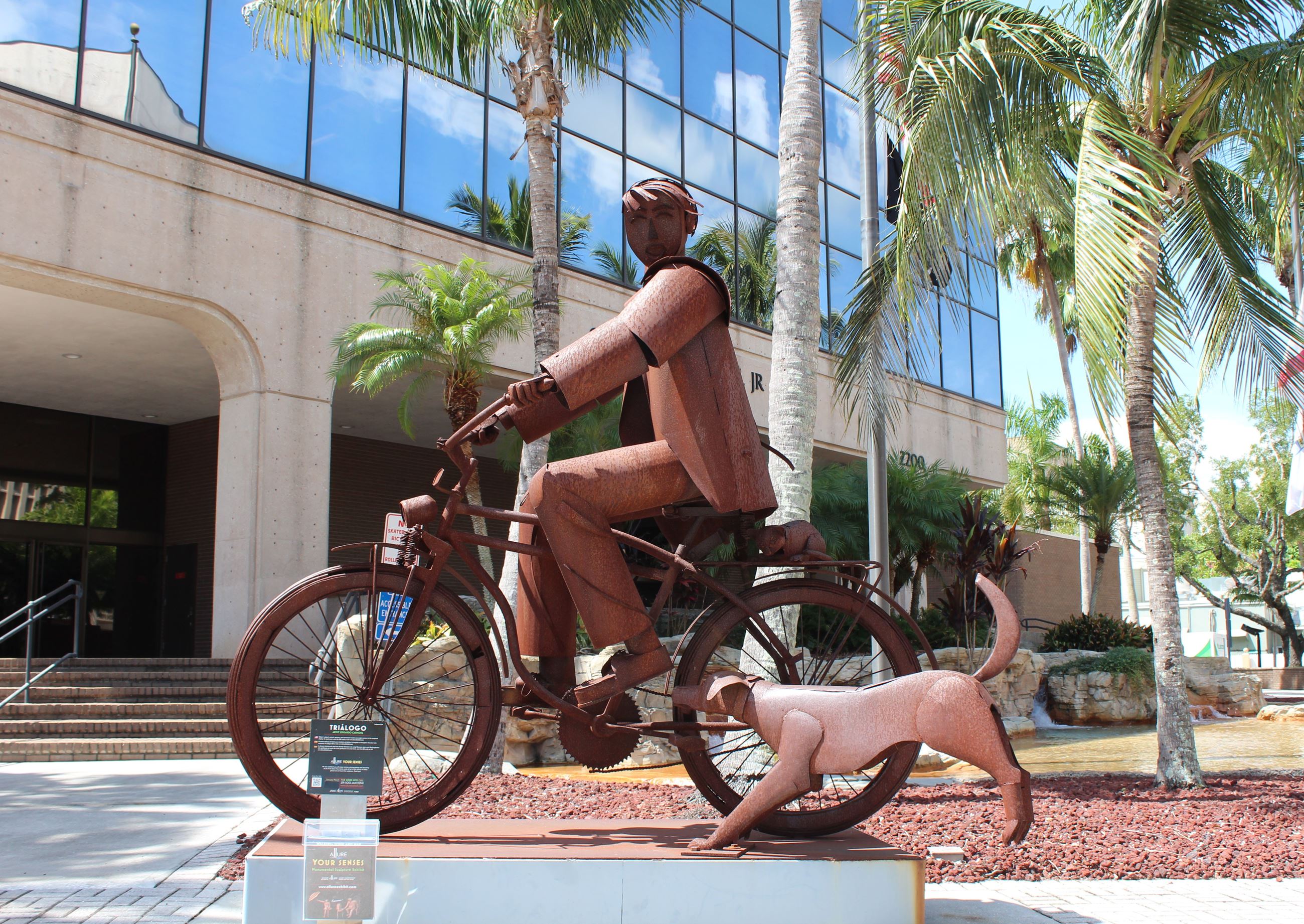 Trialogo (Cyclist and Dog): In this piece, sculptor Edgardo Carmona outlines extremes, depicting limits but also infinites, showing the tangible as well as the intangible. Object, subject, animal, gestures and movement create one single moment in this sculptural display, which features accuracy in line, volume and shape. The dog runs towards the pedaling cyclist attempting to bite at his heel, while at the same time challenging the bicycle itself. This sculpture depicts gestures while creating a scene with movement. 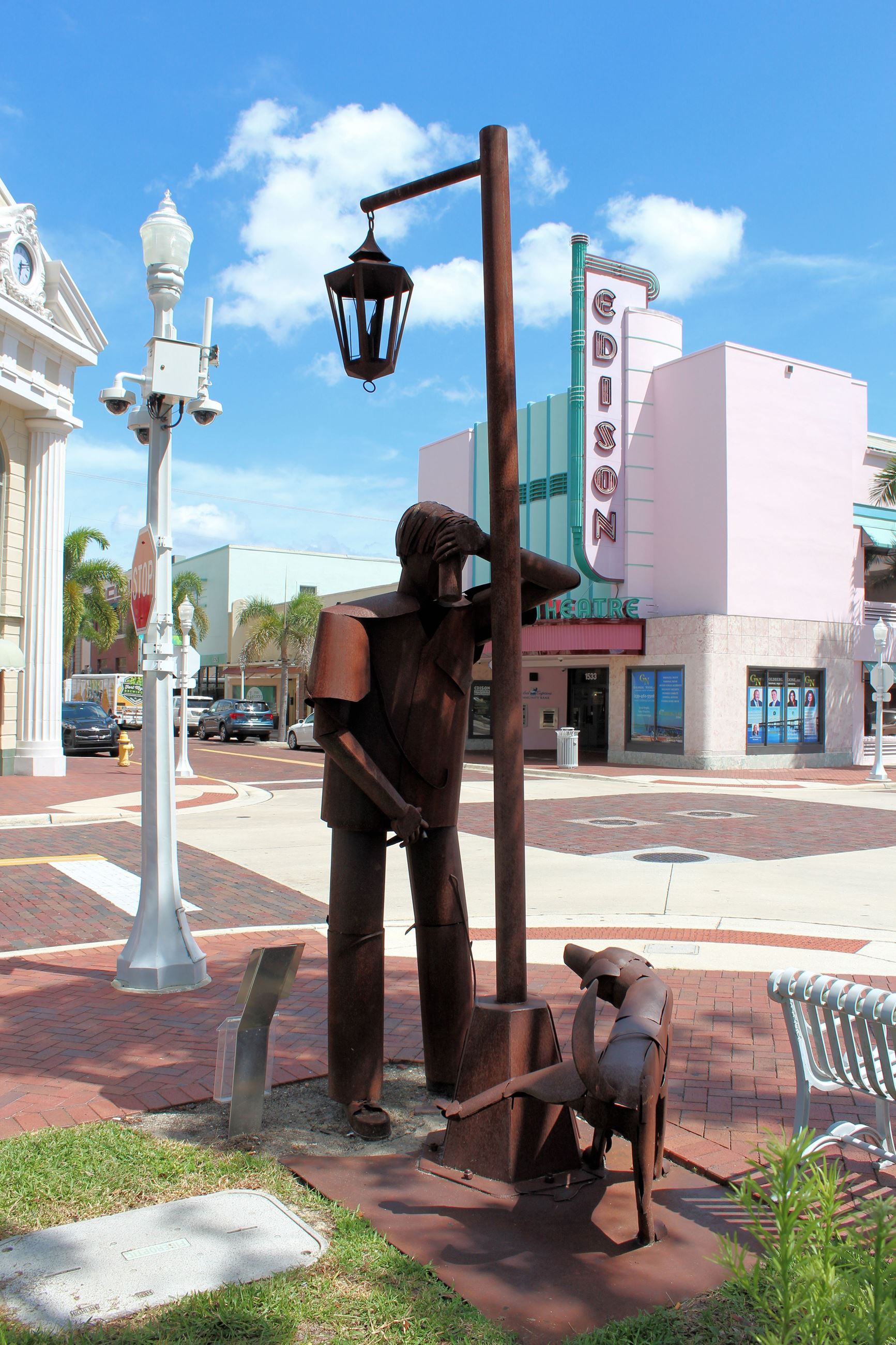 Territorios (Marking their Territory): This sculpture presents the irony encapsulated by a dog “marking his territory” in the same way as the man who’s leaning against the light pole. When originally unveiled, Territorias stirred a bit of controversy. Although the Public Art Committee hadn’t noticed this detail when they originally reviewed images of the sculptures, the Committee refused to give in to demands for the artwork’s removal and today it is one of the collection’s most popular pieces. Some people think it’s humorous; others simply concede it as a fact of life. A watercolor artist painted an image of the work and printed it on t-shirts, which quickly sold out. 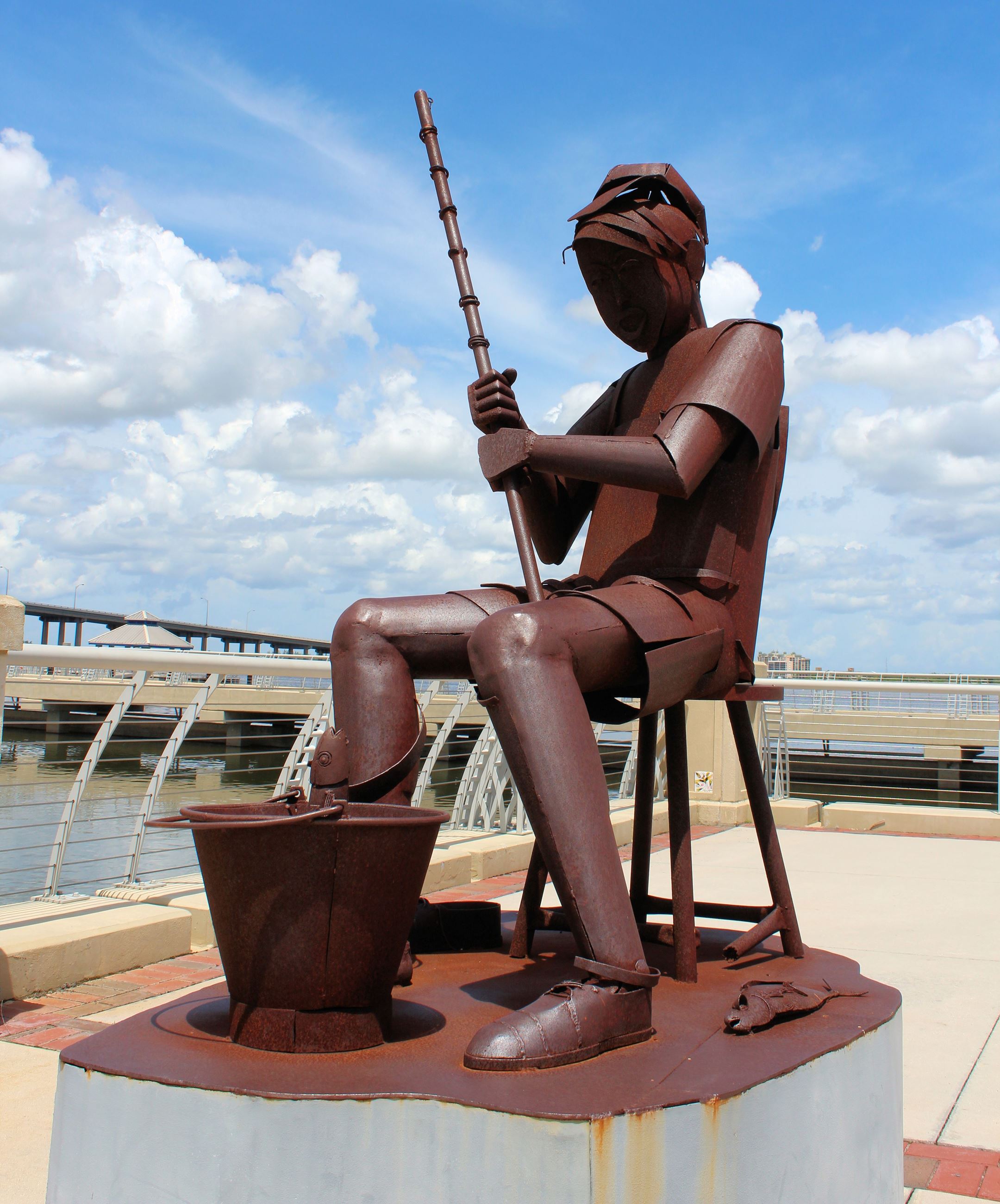 Utopia (Boy Fishing from a Bucket): This sculpture depicts a boy fishing from a bucket. Because of its message and meaning, it is sculptor Edgardo Carmona’s most tender piece. It brings to life Rafael Pombo’s Simon El Bobito, a local children’s story about a boy who fishes from a bucket. Carmona gives this common story a new and happy ending, bringing triumph and happiness to Simon by giving him a fish to capture from his bucket. This piece creates a message around the Pygmalion effect and the theory of self-realization. 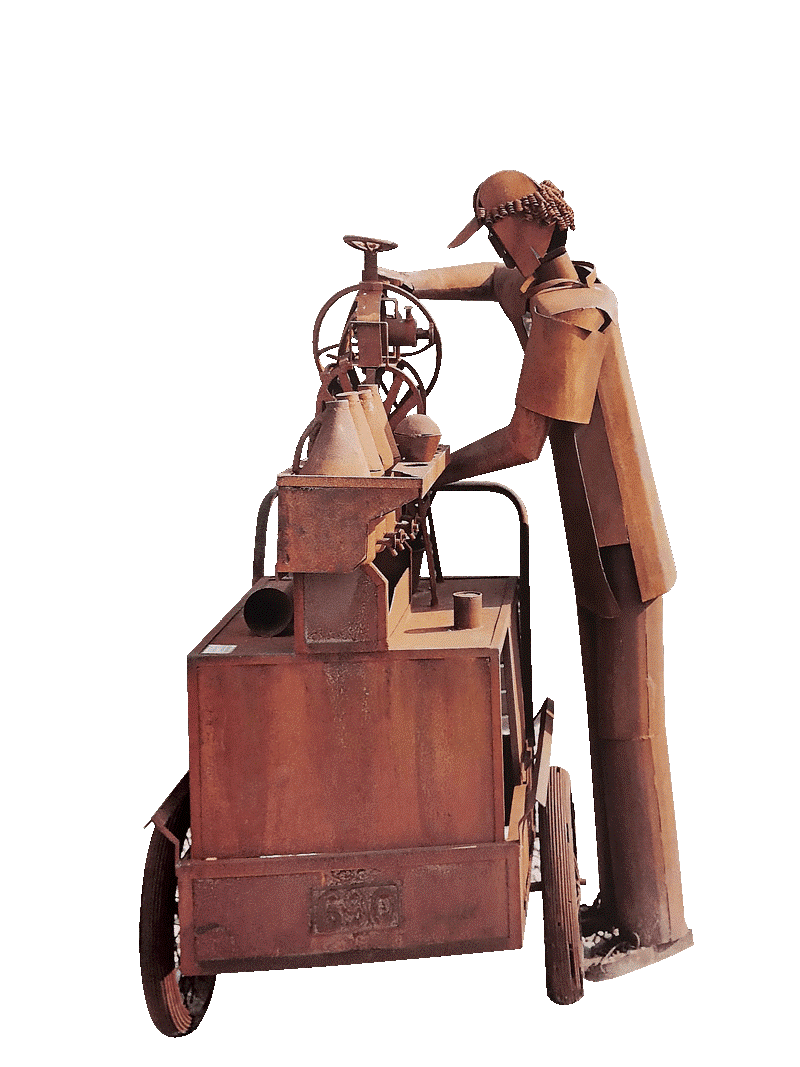 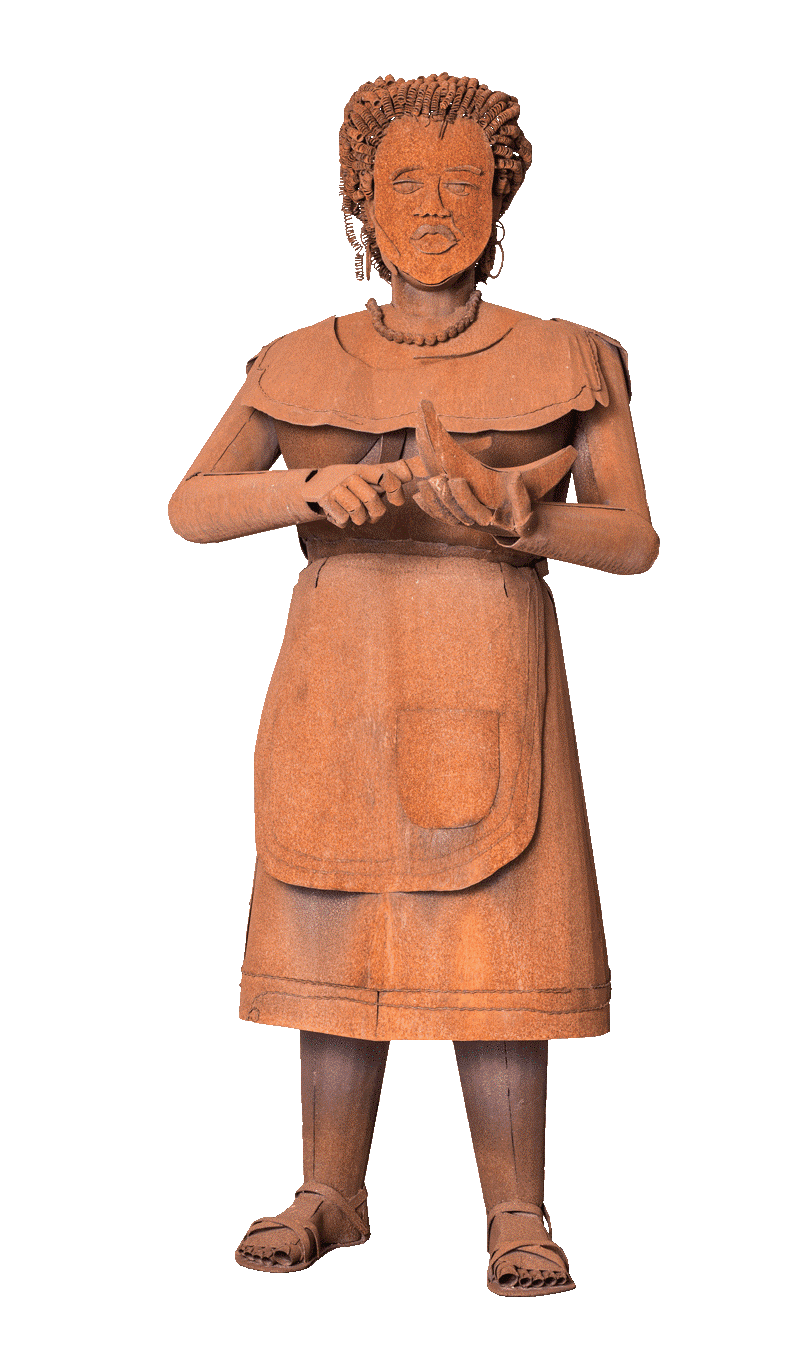 Vendedora De Frutas (Female Fruit Seller): One of the most emblematic characters of Cartegena de Indias is the palenquera, a female fruit seller of San Basilio de Palenque. This piece depicts the majestic figure of the palenquera, with her grand fruit basket sitting above her head, as if she carried with her the weight of the world.

Edgardo Carmona is a Colombian sculptor who was born and raised in Cartagena. He works primarily in metal, particularly Cor-Ten steel. In connection with the latter medium, the artist employs a combination of hydraulic machines, sandblasting and a proprietary technique to stop the oxidation process and give his sculptures a pleasing, rust-colored patina or skin. Carmona has exhibited his work throughout South America, Europe and the United States, including the cities of Bogota, Panama City, Munich, Paris and Rome and his art can be found in private and corporate collections worldwide. 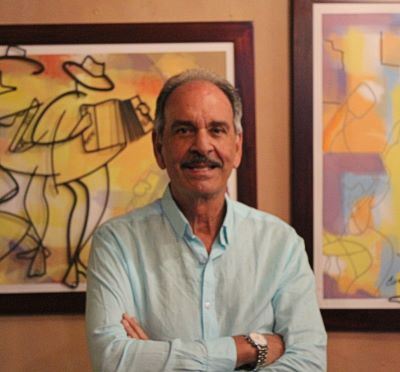